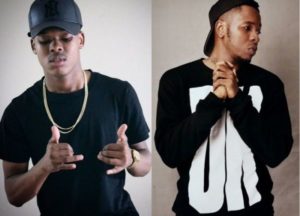 Embattled singer, Runtown is set to drop two new “bangers” today, April 4th, 2018, going by his tweet. His fans should look out for the input of South African rapper, Nasty C, on one or both of the coming releases.

Runtown announced on Twitter that he would be dropping two new materials. He stated that the materials would be out in public on the night of April 4th, 2018. He added that he worked with Nasty C on the record(s).

The pair had previously worked together on a Coke Studio promoted record titled ‘Said.’ The song which had the blend of Runtown’s cultured singing and Nasty C’s reflective rap verse, went on to garner massive airplay across the continent and the same is expected of the soon-to-be-released records.

The post Another Runtown, Nasty C Collaboration On The Way appeared first on TooXclusive.