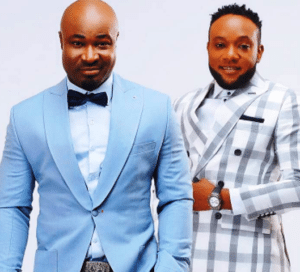 If you have not been following up on the dirty secrets and gist of the music industry, listening to Harrysong’s new song Selense is all you need to keep up with the happenings in the industry –Don Jazzy missing out on Linda Ikeji, Paul Okoye (Rudeboy) threatening his twin, Peter (Mr. P); the Wizkid and Tiwa gum-bodying and more.

Even with all of these, one gist or perhaps diss, stands out on Selense. Its about a certain  ‘be be be‘ getting another writer. On the hook of the song, Harrysong sings, ‘ladies and gentlemen, gossip dey for town. Them say- them say ‘be be be, don get another writer.’ The line brings back memories of Harrysong’s tumultuous exit from 5 Star Music.

During the heat of his troubled exit from the label, Harrysong mocked KCEE for lacking songwriting skill, stating that the Akonuche singer relied solely on him for compositions. Since the release of Selense, speculations have been swelling that Harrysong covertly shading KCEE with the line about having a new song writer.

It is not impossible that Harrysong meant to shade KCEE through his music. The Selense singer seems to enjoy making the whistle-blower style of music. In 2017 when his exit from his old label was still fresh, the singer used the same tactic to get at his ‘enemies’. He released a song titled Arabanko, on which he did a good job at shading his old employers and friends, KCEE and co.

The post Another Shade For KCEE In Harrysong’s New Music || LISTEN appeared first on TooXclusive.