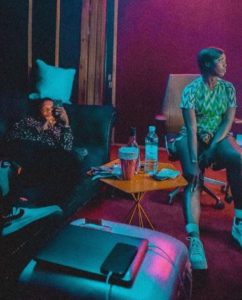 Whenever there is a story about Wizkid and Tiwa Savage, it is usually about music – a new hit or a smashing stage performance but the latest story about the two star singers suggests that they have been having sex.

A lot of people have been talking about the nature of the relationship between Wizkid and Tiwa Savage. One thing is clear and that is the fact that the two singers share a strong music chemistry but their interactions on and off social media suggests that there might be more to it.

It is common knowledge that the two singers carry themselves as the king and queen of Afro-pop music but the rumor of their amorous relationship started to spread, after a video showing Wizkid plant a kiss on the beautiful Mavins’ songstress, trended on major social media platforms.

Tiwa Savage who recently took the divorce option to end her marriage of about 4 years, has been rumored to have ‘something’ with Wizkid and the story got leaked against their will. The talks is starting to intensify as more testaments continue to surface.

But no be my mouth una go hear say Pastor mess.

Erm so I heard they attacked Cee-c at the airport, plus there are new evidences that Wizkid and Tiwa Savage could be knacking

The post Are They Having Sex? – Fans React To This Picture Of Wizkid & Tiwa Savage appeared first on TooXclusive.