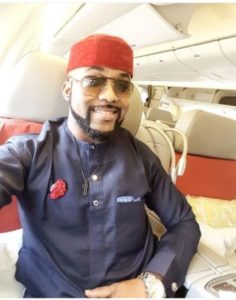 Singer and filmmaker, Banky W has landed another endorsement deal. He announced on Instagram that he is now a brand ambassador for Pink Oak Trust, a cancer foundation that aims to help people suffering from cancer through donations.

The singer took to Instagram to share the news and implied that he has special interest in the deal because of his personal experience with cancer.

Towards the tail end of last year, Banky W told the world that he successfully underwent treatment for skin cancer tumor. He took to Instagram to express his gratitude to God and people who supported him in his battle against the lethal disease.

Citing this history, he stated that he is excited to work on the project not just as an ambassador but as a survivor, a herald of hope and also as a financial donor to the foundation. He expressed his interest in seeing the foundation grow and offer other cancer patients the chance to fight for their lives.

Today, I signed on as the Ambassador for @pinkoaktrust because I feel like this is one more way that God can use me to provide hope and help to those in need. Pink Oak’s mission is to raise as much money as possible, to pay for the treatment of as many Cancer Patients in Nigeria as possible. I’m not only donating my time, talents, image and platform to raise awareness… I’m also contributing my personal finances. Many people know about my own battles with Cancer. I’m forever grateful to God that I am alive and well, and that I was able to fund the treatment I needed. Unfortunately, over 90,000 Nigerians die every year due to cancer… simply because they can’t AFFORD to fight. Treatment is expensive and so many people die because they’re just unable to pay for surgery/pills/chemo/etc. That has to change. And the more of us that contribute, the better. It would be great if one person donated 100 mill. But it would be just as great (and even more powerful) if 1 million people gave 100 Naira each. Please join us and by God’s grace, we will be successful in our War Against Cancer. Pls donate by going to www.pinkoak.org/donation and pls spread the word. I have, you should too. #TheBankstatements #pinkoaktrust #cancer #cancersurvivor #cancerfighter #ambassador #SpecialAnnouncement