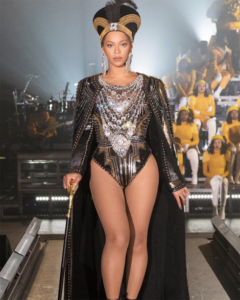 Beyonce brought the world to a halt with her performance at the 2018 Coachella Arts & Music Festival. The famous pop singer pulled series of surprises at the event, including the rendition of Fela’s 1976 track titled ‘Zombie’, by her band.

Beyonce became the first black woman headliner of the famous Coachella Festival on the night of April 14th, 2018; as she delivered a 2-hour long performance that kept her audience cheering in excitement, all through.

The performance holds an extra significance for Nigerians who have been celebrating the fact that the ‘Queen of pop’ took some minutes of her performance time to pay homage to the Legendary originator of Afrobeat, Fela Anikulapo-Kuti, by having her band make a beautiful rendition of his popular ‘Zombie’ song.