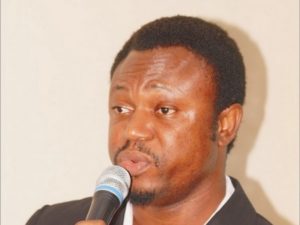 TX News had earlier reported the chairmanship crisis facing the Copyright Society of Nigeria (COSON), which led to the arrest of two of its members; 2baba’s manager, Mr Efe Omorogbe, and Joel Ajayi.

Mr Efe Omorogbe spoke to Pulse NG about his reported arrest. He said,

“Yes, I was arrested, but I have been granted bail and we will address the issues shortly after due consultations with my team.”

Further speaking on the crisis leading to his arrest, he said,

“The matter is dead on arrival , as it is just tactics to fight people from demanding that people should do the right thing”.

He goes on to add that he remains the chairman of the group and he has no plans to vacate the position.

Mr Efe Omorogbe is tussling for the seat of COSON chairman with Mr. Tony Okoroji, the founding chairman of the group. The latter was ousted from the chairmanship seat in the last quarter of 2017,  following allegations of high-handedness and gross abuse of office.

Following the “end” of Mr Tony Okoroji’s 7-year reign, Mr Efe Omorogbe was announced as the new chairman of the body on Thursday, December 7, 2017, with a press release issued by notable industry names like COSON director Dare ‘Baba Dee’ Fasasi alongside Obi Asika.

This development was later condemned by the COSON general assembly, under the leadership of Sir Victor Uwaifo who reinstalled Mr. Tony Okoroji and his board which is constituted of the likes of Azeezat Allen, Ras Kimono, Kenny Saint Best and Sir Shina Peters to continue running affairs of the body till the next Annual General Meeting of the society later this year.

Sometime earlier this week, Mr. Tony Okoroji submitted a petition to the police, which led to the arrest of Efe Omorogbe and Joel Ajayi on the grounds of forgery and impersonation.

They were charged to the Igbosere Magistrate court later in the morning on a four count charge of forgery, fraud, falsification of documents with the intent to defraud and having conducted himself alongside others at large to commit breach of peace by storming the venue of the meeting of the reinstated COSON Chairman, which is an offence punishable under section 168 (d) of the Criminal Law of Lagos State of Nigeria 2015 but were later released, Pulse NG reports.

The case has been adjourned till May 17th, 2018 in the case file A/29/2018 between Commissioner of Police vs Efe Omorogbe and Joel Ajayi.