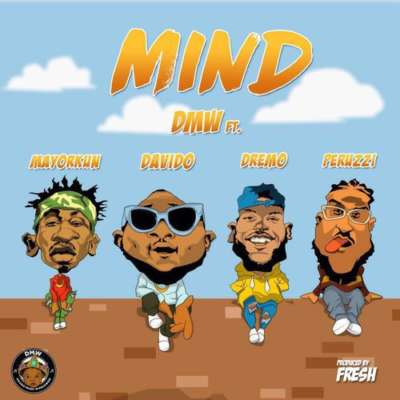 Davido Music Worldwide (DMW) has become a powerhouse as far as labels in the Nigerian music industry, goes. The label which was birthed after Davido excused himself from the family gathering at HKN which produced mostly mediocre music, save for Davido’s offerings which, for most part of his stay there, were the label’s best products.

Davido went on to lay the foundation of his own label, DMW, signing on Mayorkun and Dremo in its threshold – acts which have turned out to be smart dealings especially in the case of the now ‘Mayor of Lagos.’

2017 was truly a special year for the team which saw Davido rise to peak of continental dominance while Mayorkun held it down as the one of brightest music talents on the continent. The label started the new year with positives and here is the review of their most recent release, Mind.

@ibironketweets I sincerely have no words of praise for any of the DMW acts for this song, neither do I have words of criticism for anyone in the team other than Dremo who is supposed to be a rapper and could have easily given this song what it is missing – a rapper’s touch. By singing, he made his contribution inessential, because he did the same thing as Davido and Mayorkun did. I can’t even tell the difference between Dremo and Peruzzi’s verse for instance.

In the end, the song is okay, it is quite buzzing now but in a couple of weeks from now, we’d have moved on from it.

@dahnielz It’s 2018 and the DMW boys are not sleeping on it. The label have had quite an amazing 2017 with only a couple of things to improve on.

For the song ‘Mind’, I must commend the delivery of the DMW boys on this song. Although, they probably stole one or two lines from Usher Raymond, one can’t help but appreciate their lyricism on the song. Davido, being the boss, blazed the trail and both Mayorkun & Dremo didn’t fall hand (still don’t know why Dremo didn’t rap on this record though). That being said, one person who stood out on this song is the new signee, Peruzzi who somehow switched the vibe on the song for his 30-second verse, good one.

We hope to get more from him in coming months and hopefully his sound would not be tweaked.

Very soon, Fresh will rise in the rank and become a force to reckon with in the industry. He provides a set of sounds that stays different from all others.

A DMW compilation album won’t be a bad idea too. Been a while since we had one of those.

The post Davido, Mayorkun, Dremo, Peruzzi . . Who Had The Best Verse On DMW’s “Mind”? appeared first on tooXclusive.