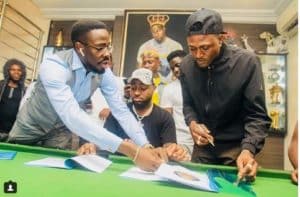 The DMW boss broke the news to the public via Instagram. Davido shared a video of  the Shepeteri singer singing the dotted lines, on his Insta story. He followed it up another post which contains a picture that captures the scene of the contract signing. His post was captioned,