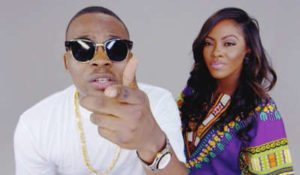 It has been reported that DJ Kaywise JOOR concert 3, which held on Saturday January 27th, 2018, was marred by the breakout of violence at the event venue and it hindered the performances of artistes like Olamide, Tiwa Savage and Lil Kesh. According to the report, Tiwa Savage was set to perform when violence broke out at the venue of the event, as the atmosphere at the venue was polluted with tear gas and sounds of gun shots. This caused Tiwa Savage to retreat and exit the event venue. The eye-witness also said he heard the voice of DJ Kaywise begging DJ Big N to persuade Tiwa to stay and perform, as he assured the Mavin Records DJ that order would be restored.

Further reports are that Olamide and Lil Kesh arrived at the venue just about the time when the violence had reached its peak and they had to turn back with their retinue, without performing. The event lost its much anticipated thrill due to the chaotic scenes that left several fans injured including the eye-witness. Tooxclusive is digging into the story to get more facts on the happening at the event.