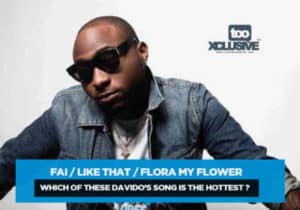 Davido has established himself as a seasoned hit maker with back to back hit songs that have helped him literally monopolize the highest positions on music charts. In the last couple of months, the singer has put out so many materials that it has become hard to choose the hottest between them, Flora My Flawa, Like Dat & FIA which one is the hottest – you decide!!!

The post FIA/Like Dat/Flora My Flawa/…Which Of These Davido’s Songs Is The Hottest? appeared first on tooXclusive.