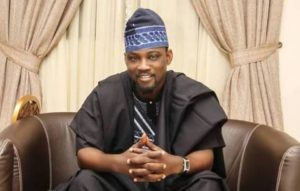 Iconic fuji singer, Pasuma has been honored in Georgia Atlanta in the United States of America (USA), with a honorary citizenship status.

The singer was conferred with the citizenship status by the Secretary of State in Georgia. Pasuma shared this news via his Instagram page, expressing his “immeasurable thanks go to the Almighty God” and to all his fans, at home and abroad for their endless support.

Pasuma later made it to the Senate Parliament House in Georgia Atlanta for the confirmation of his citizenship status where he met with the deputy governor of the state.

Alhamdulillah for all the blessings.?????? I have been honoured in Georgia Atlanta, USA, as a Citizen of the State. Thanks to the Secretary of the State here in Georgia for this honorary citizenship of Georgia (Atlanta). My immeasurable thanks go to the Almighty God for this wonderful accolade. To all my fans, at home and abroad, especially here in Atlanta Georgia, thanks for your endless support. May God bless you as you keep standing by me. We shall reap the fruits of our labour. Amen.