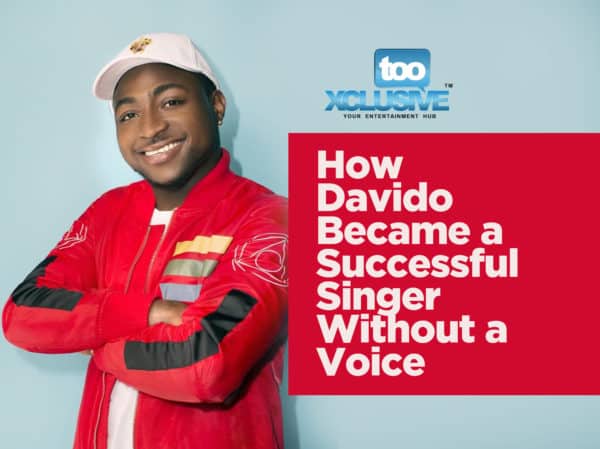 I’m not trying to rehash an old flame but during the epic Wizkid-Davido saga that coursed through the year 2017, one of the ways the not-so-avid fans of Davido could always go for his jugular was to attack his voice. So bad that Wizkid had to tweet one time about something in the sort of ‘even baba blue no fit cure frog voice’.

Away from all the gifting that is the indefatigable person of Davido, it is a clear point that a sonorous voice (going by standards and the technicalities of what actual good singing is), David is in absolute lack of. But how has he managed to make it, to succeed with utter relish, and to the envy of many, to keep afloat, and quite impressively too, as a singer, with that voice? These are a string of questions where applied reason continues to evade my attempt at proffering logical solutions to.

In quite recent times, the Nigerian music industry has defaulted in being a safe nest to foster the talents of those impeccably skilled in the vocal art. What then should an aspiring star make of his dream when he has to be told time over and again by his friends, producer, manager and music marketer that ‘Timi Dakolo no dey sell market’? As an industry, we keep having instances where true vocal talents bank on music reality show platforms to announce and recognize, but not exactly sell their craft; and otherwise leave them relegated to the confines of the church (choir), the karaoke bar (for the secular-minded) and friends. It is almost as if good singers never came out of the Nigerian music industry when you skim through the order of artistes buzzing the space currently.

This same industry has examples in the persons of Iyanya, Praiz and Chidinma (their common factor being that they are all products of show competitions) whose careers had to suffer a temporary setback that resulted from an attempt to switch-up their style because the market had pressured them to explore whimsical themes in their music. And in all these cases, the singing suffered. Iyanya had a song on his debut album Iyanya vs Desire titled ‘Somebody’ – it featured Tiwa Savage who was just cut fresh from jand at the time, and with all the energy in her contralto. The song was basically a subtle shade to vocal techniques in which Iyanya clearly stated was not the reason why we (Nigerians) are here. Of course this was after the big break that the ‘Kukere’ single had brought him in 2011 (we all know this story) – but that didn’t stop Mr Mbuk from breaking into a sweet-sounding and soulful vocal serenade, if he decided to.  So when a 25-year-old kid called Davido with hardly a voice and the skill to go with bursts on the music scene and has since been roller-coasting upandan to the point of winning controversial titles and highly coveted awards, even bagging a Sony music deal that became the pivot for association with music greats the order of Mafikizolo, Nasty C, R.Kelly, Jay Sean, Cassper Nyovest, and now Sean Kingston and Tory Lanez, one has to wonder why. One has to wonder how.

Now I need you to understand that my expectation is not for David to not record his successes, nor is it for him to have a career experience that flukes out along the line and leaves him stuck in-between that point of limbo dividing fame from obscurity, no! Only that I find it crazy atimes – that is to/for those people who make bold, adjudging him a singer, like some folks do Wizkid too when he is being tagged a vocalist (although his is a pretty debatable point). Maybe David is not the typical, ideal definition of what a singer is or should be; may be his signature voice alternatively happens to not be the case in music considering it makes for a very terrible tone but inasmuch as the singer term connotes one who produces musical sounds using the voice and with a variety of vocal techniques, one cannot deny that it’s taken more than just a voice (or the absolute lack of it thereof) to make Davido this successful.

On the other hand, what’s a banter about Davido without the mention of his wealth? Davido has never lacked the wherewithal to creating a means for himself. His privileged background had him adequately backed with the necessary resource to succeed in a heavily and capital intensive industry like ours. In the year 2011, when he was still a rookie, he could conveniently afford the services of the highly revered Clarence Peters to shoot and direct his music video debut. That was a feat of class that could never have been the lot of his up-and-coming colleagues back then. Rumour also claims that when he wanted to record the song that had the Naeto-C feature, the hip-hop royal stipulated what he thought to be an impossible reach for Davido. However, the OBO came through, and the song Back When ultimately became one of those music singles that further stamped his announcement (presence) on the music scene.

But that was as far as the money could take him. Today, David has numerous awards that range from prize in music to most gifted artist and song of the year. Today, he is maxing out the numbers with steady precision on digital streaming platforms like iTunes, Spotify and YouTube. Only yesterday, he announced his Diamond and Platinum certification for the songs If and Fall respectively. It is not the vocally savvy that have the numbers of 13 presidents at the touch of a button, it is David. World Football star, Ronaldo saw it fit to follow no other Nigerian/African music star doing great and mighty things, rather it was David he saw. And it is this same David whose only song (with a local rhythm) made the motivational playlist for the English under-20 world cup team.

So you see, he might not possess the swooning light-lyric tenor of a Wizkid, he might as well be shouting on his record, or doing the loud musical rant like I would often put it; it still doesn’t take away from the consistency, hardwork and self-development that has grown the status of his music artisanship to a very jealous one. Also, there is the characteristic of grace and the unction of service his spirit carries that is playing a bigger role in his world announcement and domination conquest. Not like the others do not share these exclusive traits but having to think this thought aloud makes it a whole lot more perplexing to ascertain whether or not he really should be faulted for why the actual singers with proper and practice-to-be-perfect vocal talent are not accounting for a record of successes like he is. And I guess we’ll never know!

The post How Davido Became A Successful Singer Without A Voice appeared first on tooXclusive.