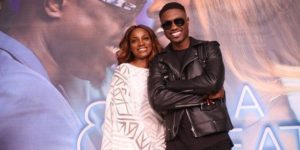 During a recent interview with Saturday Beats, Vector spoke about his foray into acting where he played the lead role in a movie titled Lara and the Beat, alongside songstress, Seyi Shay. He spoke particularly vocal about his kiss experience with the beautiful songstress.

In the Biola Alabi Media movie, the rap artiste locked lips with Seyi Shay several times and the chemistry between them was quite intense and real. During the interview the rapper confessed that when he kissed the Yolo Yolo singer, he was aroused but he had to control himself.

“Seyi Shay and I had been friends for a while even before the movie but it was not awkward kissing her. It takes a level of expertise to kiss someone and try your best to suppress your feelings while you do it, especially with Seyi Shay. I won’t deceive you, I was aroused when I kissed her but I had to control myself. It is all about the control, I mean we are talking about Seyi, she is beautiful,” he said.

When asked whether there is a possibility of a relationship between them, the rap artiste simply said,

“I am not trying to predict the future but you would never know, something could happen between us. At this point, Lara and the Beat was an awesome project. Let us leave it at that for now.”

Commenting further on his experience on the set, Vector revealed that he had to take a crash course on riding a power bike to be able to cope.

“My experience on the set of Lara and the Beat was an amazing one and I even had to learn how to ride a power bike because of the movie. It was a crash course so I had to learn how to ride the power bike in less than a week. I had nursed some fears while I was learning how to ride a bike. The truth is that I learnt how to swim when I realised that the amount of water it takes to drown in the ocean is the same amount it takes for someone to choke while eating. I can be scared of riding a bike but that is all it would be, fear. I have to learn to conquer it and move on with life,” he said.

The post How Seyi Shay Got Me Aroused – Vector Reveals appeared first on TooXclusive.