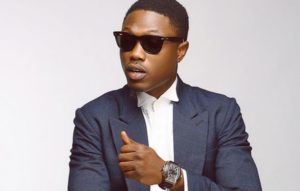 Popular rapper and famous free stylist, Vector revealed how the death of his father last year changed many things about him. In 2014, the rapper had a feud with his former record company, YSG Entertainment, which ended in court and for a year he was not able to do music.

In an encounter with Sunday Scoop, Vector admitted that he mismanaged information during his feud with the record company and he paid for it. He said,

“To be honest with you, the only reason I was taken to court was because I was popular or becoming popular. I must have mismanaged information on my part as well. I hate the fact that it slowed down my music and I lost money too. But I have learnt to try to be more patient and understanding with people. You cannot fight with people forever regardless of what could have happened. I have reached out to my former label and we have spoken.”

Speaking on his regrets, he said,

“Everything happens for a reason and I am grateful for my present position. Everyone regrets things; I regret things too but I just don’t dwell on them for too long. I will be stupid to tell you that I didn’t regret something that escalated to the extent that I could not make music for a year or so. Of course, I had regrets but I never let it drag me down. I took all the money I had and invested it in a studio.”