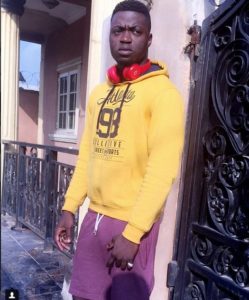 During an interview with Sunday Scoop, Olamide’s brother, DJ Enimoney, revealed that he hadn’t been finding things easy since their mother passed on.

He said, “I miss my mother a lot as she was my source of inspiration. I wish she was here to celebrate my birthday with me. She always told me that things would be okay. Even though she is dead, I still feel she is still with me at all times. We don’t have parents again (their father died years ago) but God. I was sleeping when my elder sister called to break the news of my mother’s death.”

Speaking on a surprise birthday party held to celebrate him during the week, he said,

“I felt great, especially with the surprise birthday party. This was my first surprise party. I was deceived and taken away from my house for hours. Though I thank God for where I am at the moment and I am overwhelmed with the love I get from people, I still feel I have a lot to do. ”

At a time when things were rough for him, Enimoney admitted that he thought of quitting as a disc jockey. He studied Computer Engineering at Lagos City Polytechnic and contemplated working with his certificate. He added,

“When God says it is your time, then it is. When it is not your time, you can do many things at the same time and nothing will work out for you. There were times I thought of quitting disc-jockeying for a white-collar job. I was troubled and confused. Where I am today is just a stepping stone to where I am headed to. I know God has big plans for me. And since I became a father, I have been inspired to work harder.”

On the success of his ongoing tour, the DJ said,

“My tour is also going well even though there are some challenges. People need to look out for our new TV station, Voice Of The Streets (VOTS).”

Acknowledging the impact of Olamide’s support on his career, he said,

“Olamide has been supportive of my career and he made me who I am today. I thank God too because if He doesn’t want people to help you, it will not happen.”

The post “I Was Sleeping When I Heard About My Mother’s Death” – YBNL’s DJ Enimoney appeared first on TooXclusive.