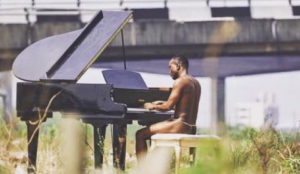 Reacting to the controversy surrounding the content of the recently released video for his song, Heya, Brymo said he went nude to remind Nigerians that they are uncivilized.

In a chat with Sunday Scoop, the singer shed light on why he took that step.

“The song is an expression of my environment. I like to paint as much as I can and I think that most of us are bush people, even though we live in cities. The video portrayed a bush man living in the city. If you look around, you wouldn’t see much evidence of civilisation. We did not create most of the things that we use in this country and that’s not good. We need to think, he stated.”

Reacting to claims that his nudity in the video was just a publicity stunt to draw attention to the song, Brymo said,

On whether he feels underrated in the country, he said,

“No, I am not. People are used to a system and if you want to change them, you have to do it slowly. My albums are doing well and we found that most people, who download my music are in Europe and America. Right now, I have no complaints.”

Dismissing claims that he doesn’t perform at top concerts in the industry anymore, Brymo said,

“I only perform at top shows. Just this week, I have had two events. I will also be performing today (Sunday) as well. Generally, I get a lot of love in Africa, and as for the people who say they haven’t seen me perform on big stages lately, they are most likely looking in the wrong places. As much as I’m looking at having an international career, Africa will always be my root. I was once signed to an American company, EGM, and I released an album with them but things didn’t go as planned and we went our separate ways.”

The post ‘I Went Nude To Remind Nigerians That They Are Uncivilized” – Brymo appeared first on TooXclusive.