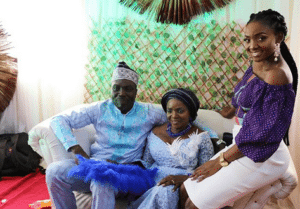 Not too long ago, it was reported that Simi played the role of chief bride’s maid at the ceremony of her mother’s second marriage. Some people talked about how hard it is for an adult to watch a parent remarry but Simi said that isn’t her case.

In a recent chat with Saturday beats, the singer spoke about how she truly felt about her mother’s new marital status.

“I am very happy for my mother and her marriage, I am happy she has found love and I wish them a lifetime of happiness,” she said.

Slowly and gradually, her mother is becoming a sensation online as most of her Instagram posts go viral mostly because she makes them hilarious. The singer told Saturday Beats that she was the one that created an Instagram account for her mother a long while ago.

“I was the one that created an Instagram account for my mother but I did it to canvass for votes for a particular project at the time. She never used it after that and she never really had the password, so I do not know how she got a hold of the account. My mother is a very funny person and the life of every party. I have always known this about her but everyone around me is just noticing that about her. Most times, I don’t see her posts on time so my friends would call my attention to something she must have posted. I feel it is cool that everyone is seeing that side of her. My mum has always been active on Facebook, so I am not surprised that she is now active on Instagram. She is a very funny person,” she said.

The post I’m Happy For My Mother & Her Marriage – Simi appeared first on TooXclusive.