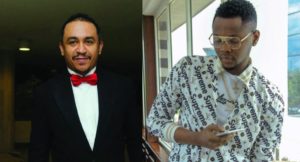 Following the news that Kiss Daniel was exposed on social media for putting on a fake Louis Vuitton jacket, controversial leader of FreeSheeple Movement, Daddy Freeze, has joined in calling out the singer.

The controversial social commentator, Daddy Freeze made series of Instagram posts with which he made it clear that although himself and his family members are fans of the singer, he sternly objects to the singer’s act of putting on fake designer wears. He termed the act as Intellectual Property Theft, comparing it with prostitution. He stressed that it is a criminal act.

I love everything about @iamkissdaniel. My kids and I love his music and his personality and I do believe this won’t happen again. – I believe he won’t be happy if people pirate his intellectual property leading to revenue loss for him, the same applies to LV. – Wearing counterfeit products is actually a crime! ~FRZ – #Repost @yeezybusta with @get_repost ??? bruh #busted

Are Nigerians ever going to learn?? There was once a survey that estimated our average intelligence quotient at 67. – In the developed world, an IQ 67 is considered retarded and in some countries, such a low IQ you entitles you to government benefits. – I initially discarded these figures, but with the level of stupidity I see especially on social media, I believe I have cause to be worried… – I have nothing against kiss DANIELS I genuinely appreciate his talent, so I will pay to download his music, not but it in traffic, because Kiss DANIELS won’t like his intellectual property stolen, I’m sure. – I am hoping he didn’t buy fake and if he did, he didn’t know that he was patronizing counterfeit products. – In many countries, you can earn jail time for buying counterfeit products. – IN FRANCE, YOU FACE UP TO 3YEARS IN JAIL FOR CARRYING A FAKE DESIGNER BAG! That’s right, just carrying a bag could spell out all sorts of woes for you. – Scroll left to see posters at airports in many countries, warning travelers of buying and even wearing these products! – Counterfeiting is similar to prostitution, in the sense that it’s not only the prostitute that is a criminal, those patronizing her merchandise are guilty as well. – Comments like “is it your fake” and “cloth na cloth” only serve to highlight the many shortcomings of this nation, especially with regards to education, enlightenment, exposure and average IQ. ~FRZ – #FreeTheSheeple