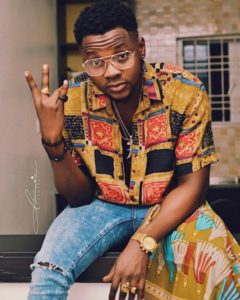 Flyboy I.N.C front man, Kiss Daniel might just have kicked off a project to get fresh music talents off the streets, going by his activities on Twitter. The singer recently made his intention to help aspiring singers on the street, public via a twitter post which read,

Time to take some fresh talents off the streets. HAPPY EASTeR SUnDAY ?? #FlyboySquad

The young singer shared two video recordings in which Kiss Daniel confirmed that he would be returning to the studio to record the hook of their colllaboration. Knowing what a Kiss Daniel hook can do on a record, @Danielswags would only need to display his music talents on the song, like he showed his determination to secure the collaboration, and his music career might just take off.

Please I need 20K retweets to feature @iamkissdaniel on my next song…. Help a brother dream come true ???? pic.twitter.com/r38yvKa9VD

Well… I think I have to start writing some dope verse ? https://t.co/lvNnqKdl9n

The post Kiss Daniel Set To Make A Star Out Of Determined Twitter User || WATCH appeared first on TooXclusive.