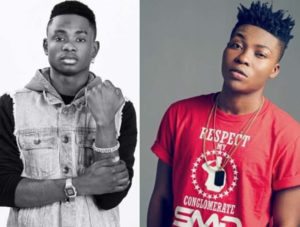 Reekado Banks and Lil Kesh have been repeatedly compared since the incident at the 2015 Headies Awards ceremony which led to a battle between Kesh’s supporters and Reekado Banks advocates.

Reekado Banks was awarded The Next Rated Award at the event, over Lil Kesh and Kiss Daniel, and Olamide condemned the decision. Don Jazzy joined the debate. He took sides with his signee, Reekado Banks, and threw shades at Olamide. This caused a big scene in the music industry where fans were split between the two music icons. The situation was later resolved and both parties held their peace.

Reekado Banks held his peace for about 2 years before deciding to open old wounds. During a concert at Ibadan, Reekado hit Lil Kesh with the line, ‘I better pass him papa.’ This sparked an outrage from fans who labelled Reekado Banks as “arrogant.”

During a recent interview with SoundCity TV, Reekado Banks addressed the issue. He tried to avoid the question on his controversial statement about Lil Kesh but he was pressed to respond and he said that he is neither friends with the YAGI records act, nor enemies. He further spoke about the possibility of collaborating with his ‘rival.’

The Mavin records singer also passively spoke about his coming collaboration with Davido. He revealed the title of the song to be ‘Ole.’

The post Lil Kesh Is Not My Friend, Neither Is He My Enemy – Reekado Banks || WATCH appeared first on TooXclusive.

Share the post "Lil Kesh Is Not My Friend, Neither Is He My Enemy – Reekado Banks || WATCH"