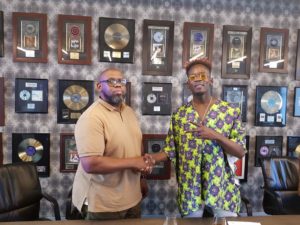 Following the news that Mr. Eazi signed a record deal with Diplo of Major Lazer’s Mad Decent, the singer has signed a licensing deal with Universal Africa.

The singer and his label Banku Music signed a licensing deal with Universal Africa for his forthcoming project Life Is Eazi Vol. 2: Lagos to London, exclusive to Africa.

Since his break out in 2016, Mr. Eazi has been consistently building his music portfolio and in 2017, he released a mix tape titled ‘Accra to Lagos‘ which contains hit songs like ‘Hol’ Up’ and ‘Leg Over.’  He followed it up with a successful world tour, before moving on to become Apple’s Up Next Artist. The singer recorded several successes in his self-assignment to contribute to the exportation of African music to the globe, by performing on platforms like The Late Late show, Sounds like Friday and Sunday Brunch.

His latest move to sign a licensing deal with Universal Africa, for his next project Lagos To London, is set to take his music career to new heights. The deal will see Banku Music & Universal Africa jointly release his new project in Africa. The signing took place in Johannesburg as Mr Eazi and the head of Universal Africa Sipho Dlamini put pen to paper. The singer shared the news via an Instagram post which included pictures of himself and Sipho Dlamini.

Major Pim Pim Alert – Today as CEO of my Label Banku Music, i just signed a Label Licensing Deal with @UMGSA , Banku Music/UMG Africa will Jointly Release My New Project (Life is Eazi Vol 2 Lagos To London) in Africa!!! Big up everyone that made this Happen! #Godwave #HappyBoyTour #Godwave ( @elbama1 @umgnigeria )