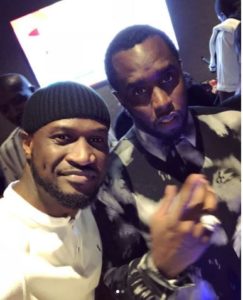 In a video that it starting to go viral on the internet, Mr. P was seen hanging out with wealthy US music businessman, P. Diddy. The video has sparked rumors of a possible endorsement deal.

Mr. P posted the video on his Instagram page, showing the beautiful moment he had with P.Diddy and the US businessman spoke about coming to Africa. P. Diddy who is known to own popular vodka brand, Ciroc, handed a bottle of his brand to Mr. P, an act that has caused people to speculate that the ‘My Way’ crooner might ink a deal with the International company.