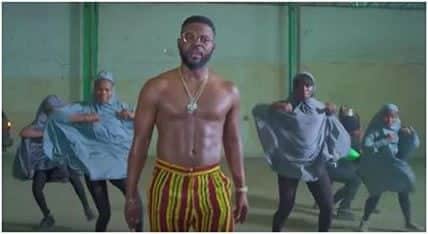 Falz has run into trouble with the Muslim Rights Concern (MURIC) because of the content of his ‘This is Nigeria’ video. The religious organization has asked the rapper to apologise and withdraw his video; or face legal action.

Following the widely applauded initiative of US rapper, Childish Gambino, to capture the unfortunate happenings in the United States, in his This Is America’ video; Falz made a cover version of the video that focuses on issues relating to the Nigerian society including the abduction of Chibok girls by Boko Haram terrorists and the incessant killings perpetrated by Fulani herdsmen.

While the rapper has received plaudits for his uncommon initiative, some groups are unimpressed. MURIC particularly, are angered by the content of Falz’s ‘This Is Nigeria’ video especially ‘the scenes in the video where girls dressed in hijab were seen dancing the “shaku shaku” dance’.

Falz later explained that the girls were a representation of the abducted Chibok girls still in Boko Haram captivity but MURIC feels insulted by it. In a statement issued by the director of the group,  Ishaq Akintola, it was stated that the dancers in the video in no way depict the situation of the girls .

The group also condemned “a character that dressed like a Fulani man, who suddenly abandoned his traditional guitar and beheaded a man” featured in the video. Describing the video as “thoughtless, insensitive and highly provocative.” The group said it could brew religious and ethnic crisis. It also said the video is spiteful and intended to denigrate Islam and Muslims.

“At least none of the Chibok girls have been seen dancing like a drunkard. They are always in pensive mood. Do they have any cause to be dancing? Are they happy? .

The video manifests ethnic bias against Fulanis while it ignored the criminal activities of ethnic militia of the Middle Belt who have also massacred Fulanis and rustled their cattle in their thousands.

It is a hate video. This video has the potential of causing religious crisis of unprecedented dimension. It is an assault on the self-dignity of every Muslim. It is freedom of expression gone haywire. .

We therefore demand its withdrawal and an apology to Nigerian Muslims within seven days or the authors and their agents will face legal action if they fail to comply.”