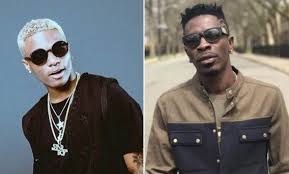 Wizkid is making a habit of staging surprises at his concerts. The singer ended his feud with Davido during his Lagos concert in the close end of 2017 and he has done the same thing by inviting Shatta Wale to share the stage with him during his recent performance in Ghana.

Sometime in 2017, Ghanaian singer, Shatta Wale, took to social media to launch verbal attacks on Wizkid. The singer claimed that the Star boy is not a super star, that he is enjoying hype. This resulted in a social media war between Shatta Wale and fans of Wizkid; and it later gravitated to a Ghana versus Nigeria war.

When Wizkid announced his concert in Ghana, it was feared that it might turn out to be violent but surprisingly, the concert produced beautiful moments of reconciliation between the two stars.

Omooooo see hall scatter when Shatta Wale came on stage to perform with Wizkid. Nice one!

The post NO BEEF! Wizkid Invites Shatta Wale To Join Him On Stage || WATCH appeared first on TooXclusive.