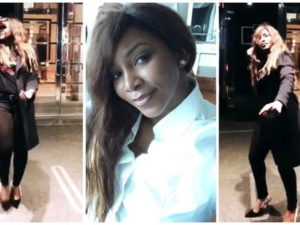 Shaku Shaku is the new viral dance in the industry, and the dance move is constantly seen everywhere on the internet space. The latest victim to the virus is Nolllywood’s finest, Genevieve Nnaji.

The thespian posted a new video on her Instagram displaying her ‘TGIF’ mood to Olamide‘s ‘Science Student‘. The video, which has gone viral, generated several comments as many were amazed that she could kill the move.

Olamide’s ‘Science student’ is one of the leading singles when it comes the shaku shaku vibe, the YBNL boss who recently signed two new acts, Lyta and Limerick has also released his first single of 2018 titled ‘C.Ronaldo‘.

Watch Genevieve’s video below and tell us if she nailed it.

? ?.. who knew @genevievennaji could kill the shaku shaku move? #sciencestudent