Olamide sent a subliminal in the direction of one of his followers who criticized his signees. A picture showing YBNL acts including Temi Ovwasa, Davolee, Lyta and Limerick was post online and a certain @sigliere made a comment hinting at the poor fashion choice of the artistes. Olamide was quick to react to the comment and he mocked @sigliere by referring to him/her as ‘Iyabo Alasho Oke.” 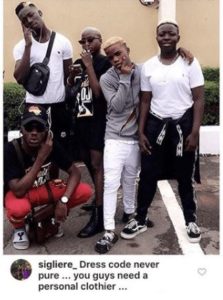 The post Olamide Hits Back At Online Troll Who Slammed His Label Mates appeared first on tooXclusive.