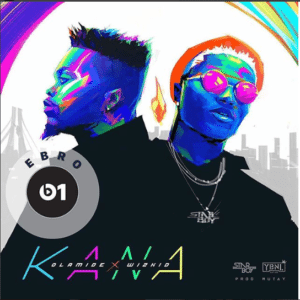 Olamide & Wizkid are two of the finest music talents of their blessed generation. From the onset, Wizkid had been touted to become the future of Nigerian music while Olamide was labeled the crowned prince of Indigenous rap music.

These two music talents have since treaded their different paths to fulfil ‘prophecies.’ Today, Olamide is the biggest name in the Indigenous rap category while Wizkid is the most recognised Nigerian artiste.

The paths of the two stars first crossed in 2011 when they made Omo To Shan and showed to the world, the synergy they share. They further collaborated on songs like Ori Mi and Confam Ni. The two music royalties linked up on a freshly released record titled ‘Kana’ and below is what we think about it.

@ibironketweets The version of ‘Kana’ which I listened to must be different. It doesn’t exactly sound like the great piece most social commentators have dubbed it. It’s grooviness and measured tempo are appreciable but we have had offerings with even better features from both artistes in the past.

‘Kana’ sounds like a song made out of boredom or perhaps the rush to make something with the rarity of having two of the industry’s finest in the studio. Flirting, which happens to be Wizzy’s favourite, is the subject here but the expression is cold.

For me, ‘Kana’ falls short of the standard expected from two of the industry’s finest. It is the kind of record two C-list artistes would put out and it would not make it to the charts but it’s there ‘cos it’s Wizkid & Olamide. For shortage of great materials, ‘Kana’ would make my list of the week’s top songs but my hope of replacing it, is high.

@dahnielz Known for his consistency, Olamide drops new songs on an average of 2 months within a year. The rapper who just recently dropped Owo Shayo has returned to our review list with Kana featuring Starboy.

Like ‘Owo Shayo’, Kana is a song that comes with an entirely different vibe from the shaku shaku wave. An Olamide-Wizkid feature in the past has not exactly been a jaw dropping one, the two are obviously not in their peak unlike they were when ‘Omo To Shan’ dropped.

Kana is just your everyday average song; I would like to think Olamide is still experimenting with other sounds to see which new ‘banger’ will rock our ears.

Not a bad effort, Wizkid’s presence or absence would not exactly have made any impact on this song though.