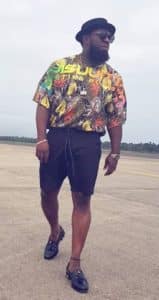 It is a known fact that some people in the society today exaggerate their wealth and happiness to meet up with the standards of the society and create an impression of a perfect life but this style of living is increasingly being condemned and singer, Timaya is advising against it.

While people are constantly being called out for living fake lives on social media, the Ah blem blem singer took to his Instagram page to advice against such act. He posted an image which carried a text that read,

Don’t go broke and in debt and impress people. Live within your means.’