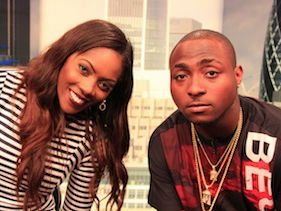 TX news earlier reported the conversation between Wizkid and Davido on social media that has been taken as a confirmation of the Starboy’s relationship with Tiwa Savage. The latest report has it that Tiwa Savage has unfollowed Davido on Instagram.

For a while now, Tiwa Savage and Wizkid dating rumors have been spreading across social media and there has been hints to support the rumors. The biggest hint yet dropped not too long ago, when Davido replied Wizkid’s tweet about looking for a sister (lover) by alluding that the Star boy already has a lover in the shape of Tiwa Savage.

Initially, Tiwa Savage seemed cool with Davido’s comment when she reacted to the story with a cryptic comment – a walking away emoji and wrote ‘by jejely on my TiwasVibe‘

Surprisingly, we recently found out that she unfollowed the DMW singer on Instagram and there are rumors that she might be mad at him for revealing her relationship with Wizkid to the public.

#Tiwasavage unfollows #Davido after he exposed her relationship with #wizkid

The post See What Tiwa Savage Did To Davido For Exposing Her Relationship With Wizkid appeared first on TooXclusive.