The Headies Next Rated category is usually one of the most tightly contested category. Mayorkun  won the award at the recently held edition of the awards. Popular music journalist, Ovie, shared his opinion that Maleek Berry deserves the award instead and he got attacked by Mayokun’s boss, Davido.

Hours after the 12th Headies ‘Next Rated’ award was awarded to Mayorkun, Ovie tweeted that Maleek Berry deserved the award and he gave his reasons. His tweet read,

‘Maleek Berry with the sauce!

If anyone else deserved to win the Next-Rated award, its the guy.

Hits on Hits for the past 2 years.

This opinion of Ovie’s got Davido to react and the DMW boss told him to ‘shut the f*ck up.’ His response tweet read, 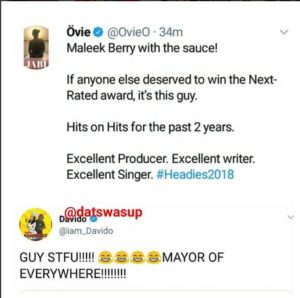 The post ‘Shut The F*ck Up’ – Davido Slams Journalist, Ovie For Comment On Headies Next Rated Award appeared first on TooXclusive.