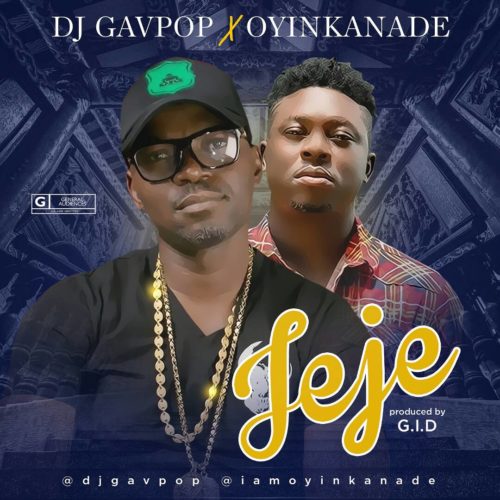 Nigerian Entertainment Awards (2016) Disc Jockey of the year “Dj Gavpop” is the Official DJ of splash 105.5 fm & Lagelu FM 96.7, The C.E.O of Time scale Records An Entertainment outfit & Disc Jockey Training Company” .
He started in the late 90’s and he became one of the most Valuable Radio DJ & VDJ helping him win big in the Nigerian broadcasters merit awards in 2016. DJ Gavpop was the 1st video disc jockey in Oyo state has won a couple of plaques on his shelf, The best DJ in Lagos under 30 & 40 awards in Oct 2016, Best DJ Eminence awards in 2016 & 2017 and Best wedding Dj in Ibadan wedding awards in April, 2017 , Maya Awards 2018 (Hall of fame).
DJ Gavpop is a skillful, energetic and hardworking Disc Jockey who has over time proven to be called the best in what he does.
Dj Gavpop hooks up Oyinkanade (the best artiste to come out of Ibadan) on the amazing GID produced tune “JEJE”.
The song was mixed and mastered by Kentee Beatz (Wicked Mix).