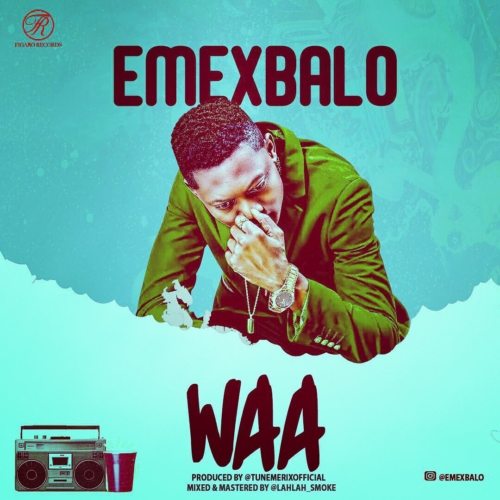 The Music Addict Hit maker so they tag him Balogun Emmanuel popularly known as EmexBalo (OmoBalogun) is no doubt a talented artiste which has been consistence in making music ranging from Pop, AfroPop mixed with afrohiphop genre, Now he has decided to Show us how versatile and flexible he can be as he switched style on this one after his previously release song titled Boogiedown that rocked the shores of Nigeria and abroad which he teamed up with Laylow an American based music producer who is behind the hit making success of artiste like Morachi, R.I.P Dagrin, Wande Coal and YQ.
He goes on to Exhilarate his fans with an all-round enjoyable tune Titled WAA which is a fine tuned blend of the street shakushaku trend and unarguably its guaranteed to be your favourite track on your music library’s play-list – Beats By Tunemerixofficial Mix and mastered By Lahlah what else are you searching for?..
The Ogun state born shows no signs of slowing down especially with his recent deal with Figaro Records which changed the status of Emex Balo, A management deal that came with a lot of goodies in the bag, obviously Emex Balo is here to stay and he is ready to export our blend, style and afroPop style of music genre to the world.
Listen and Enjoy!