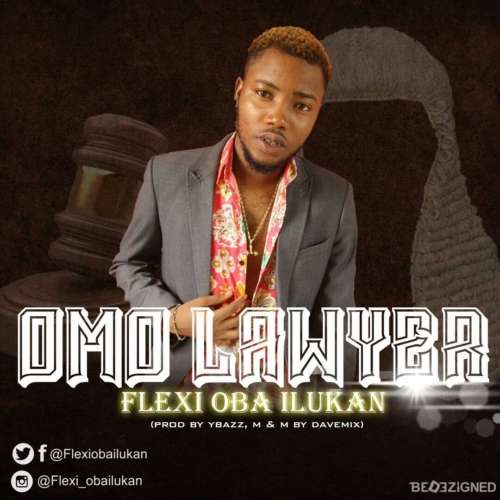 Fast rising creative and multi-talented artiste is set to release a hit single, FLEXI OBA ILUKAN in a move that will put him on the lips of every Nigerian. The song is titled ‘OMO LAWYER’

In what can only be attributed as perfect, a combination of a fine sense of judgement, discerning, timing and talent development, Flexi Oba ilukan has taken a bold move that dares to sweep the Nigerian music scene and gain national fame. To achieve this grand goal, the indigenous rap potential, Flexi, outsources the service of producer YBAZZ and master Davemix to bring about joyful indigenous melody that your ears won’t resist.

The end result is a song that is influenced by the legacies of Ajasa, 9ice, Jaywon and Olamide and yet manages to remain distinct in sound and unique in rhythm.

The track “Omo Lawyer” which drops on the 31st of March brings fun into full effect. The song is a perfect representation of the modern African street Mojo – Afro-beat, Afro-pop and indigenous Rap. The track is laced
with dynamic rhythm and Yoruba lyrics over an up-tempo beats that gets you moving your body unintentionally. Omo Lawyer is definitely the song you want to use to kick start this new month.

Follow Flexi Oba Ilukan foray in to superstardom via the following: