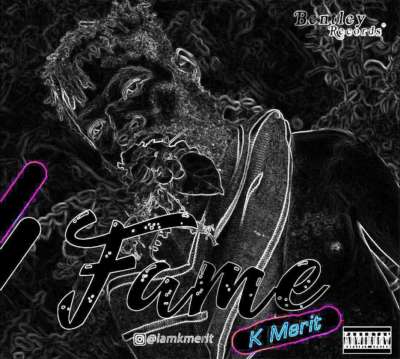 After the international success of his reggae  single; Gimme Love (Gimme Love was pre nominated for Independent Music Award New York). K-merit received a publishing and distribution deal from Bentley Records (New York).
Though not out of the Africa yet, but K-merit has been waving the Nigeria flag in an awesome way. His patois delivery is out of this world. He titled this banger FAME.
When asked about what inspired the song, he said: “FAME is the single I dropped after the success of GIMME LOVE. In this song, I explained all the bitterness and sweetness that my musical career has enjoyed. The Value for freedom is yearned for, but it is too late. I already affiliated my music publish through a deal with Bentley Records in New York, I am still yet to step out of Africa. I am appealing to well meaning entertaining Nigeria to support the art. It has not been easy,especially when there are shortages of resources to maximize my ouput. I am open for a 180 contract deal from any reputable label”
K-Merit – “Fame” ft. Maria Okanrende