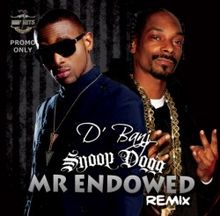 On today’s throwback, we bring to you one of the greatest international collaborations ever in the Nigerian music industry.

“Mr Endowed” is a song by Nigerian Afrobeat recording artist D’Banj, released on May 23, 2010. The song was produced by Don Jazzy. It was included on Mr. Endowed‘s track listing, an album that was never released due to D’Banj’s breakup with Don Jazzy and Mo’hits.

The song was allegedly recorded after D’Banj signed a major international recording contract with Kanye West’s GOOD Music. During an interview with April Woodard of BET, D’Banj confirmed the rumours and speculations about the aforementioned contract.