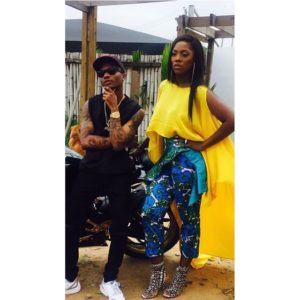 The rumor about the amorous relationship between Tiwa Savage and Wizkid continues to swell. The two singers have been spotted together more often than usual and it has sparked talks of suspicion but Tiwa Savage’s recent Instagram posts are starting to fuel the talks.

The beautiful songstress was seen hanging out with her rumored new lover and colleague, Wizkid. The moments they shared were captured in video clips that managed to surface on the internet, causing raised eyebrows. Tiwa Savage further fueled the suspicion with her suggestive posts on her Instastory, after she was seen with Wizkid.

The Ma Lo crooner posted series of pictures which suggests a newly found peace, bliss and a special connection with someone who many believe to be Wizkid. The posts have gotten people talking and it is being said that we just might have the proof we’ve been looking for, to confirm that indeed the two music stars might be dating.

Being 100% comfortable around somebody is so rare but beautiful when found, #Tiwasavage says, after partying with #Wizkid

The post Tiwa Savage Confirms She Is Dating Wizkid? appeared first on TooXclusive.