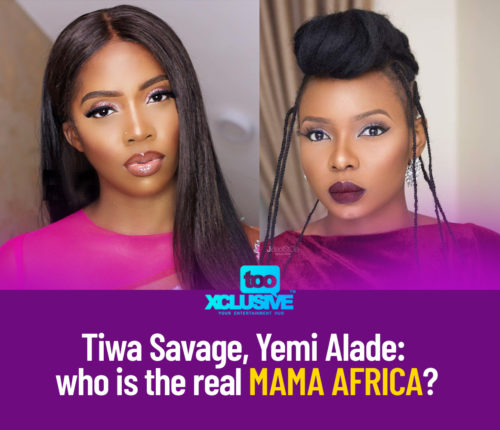 Self-acclaimed Mama Africa, Yemi Alade has worked incredibly hard, investing efforts since she appeared on the music scene mainstream in 2009/10 establishing herself as one of the best in the game. Yemi is so good that she sings beautifully in French and Swahili, which endears her music persona even more to a wider audience reach. This particular feat has seen her merge alliance with several other stars from around the African continent.

Tiwa Savage on the other hand continues to be lauded by all and sundry for her many feats achieved as Africa’s leading femme in music. Her colleagues from the upper west side are becoming particularly fond of her musical artistry, which often has her tipped by them as the Beyoncé of Africa (or in the words of hip-hop royal, Fat Joe, ‘the African Rihanna type’) basically to ascertain her status as queen – by evidence of the fantastic job she is doing in trail blazing the Africa (to the world) movement with major moves on the global front.

However, conversations have been going on for a while now especially since the release of Malo, where Tiwa sang and referred to herself on one of the lyrics as the number one African bad girl. This has raised a standard and introduced a comparison of sorts on who the actual Mama Africa is.

Thus if you had to decide, who would you say the real mama Africa is – Tiwa Savage or Yemi Alade?

The post Tiwa Savage, Yemi Alade: Who Is The Real Mama Africa? appeared first on tooXclusive.