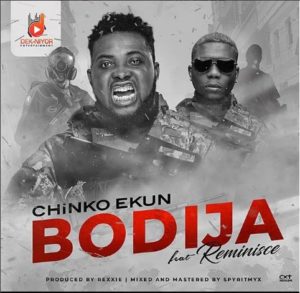 Chinko Ekun is out with the visual to his song titled ‘Bodija‘, on which he features Reminisce.

‘Bodija’ is a beautifully served Hip-hop record that connotes preparedness, alertness and fearlessness. Chinko Ekun pours out his heart on the record and Reminisce goes on a chest-beating exercise on record and together they create a charged-up atmosphere. The former puts on the character of a young star while the latter raps in the tone of a veteran.

Only recently, Reminisce released a similarly impressive Hip-hop record titled ‘Ajigijaga’ and with this new release, the pulse of Nigerian Hip-hop can be felt. We can now hold our hopes high that the dying Hip-hop spirti would be revived.

Chinko Ekun & Reminisce are playing their part in the renaissance of Nigerian Hip-hop music and it starts with this new release.