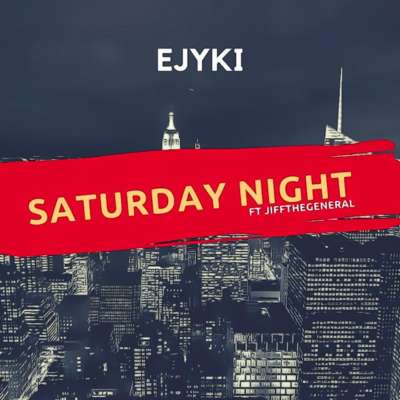 Taken from his forthcoming Road To The Bank EP, Nsukka native and indigenous rapper, songwriter and actor EJYKI is proud to present his brand new single ‘Saturday Night’ featuring acclaimed artist/producer Jiffthegeneral, and its accompanying music video, directed by Weike Ezeigwe for AfricaX5.

Highly recommended if you enjoy the likes of Phyno, Flavour and Olamide, Ejyki comes on the back of strong support from Africa Magic, Trace TV, Ben TV, Diverse Radio, Kapital FM Abuja, Coal City FM and others, for singles such as ‘Nweze’, ‘Igbo Boys, Rich Boys’ and ‘Levels’, as well as starring roles in Out Of Time, and acting alongside the legendary Genevieve Nnaji in Only Nigerian Girl.

The Enugu State University of Science and Technology graduate, who is often described as ‘another beast from the east’, for his lyrical prowess and rapping skills, describes the new ‘Saturday Night’ single, as simply a song about having fun after a week of hustle and bustle, adding that, it is “a song that expresses who I am as an artist, a songwriter and most of all, an African”.

Speaking about how ‘Saturday Night’ came about, Ejyki adds that, “‘Saturday Night’ was completed in 12 hours. I wrote it after a recent fashion show performance; inspired by the connection I had with the beautiful women, clothes and settings at the fashion show. I reached out to Jiffthegeneral that same day to record the song, and the rest, as they say, is history”.