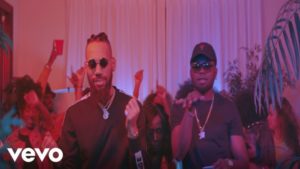 Phyno has put out the video to his song titled ‘One Chance‘, which had the input of Jamaican singer, Kramium.

The Penthauze rapper takes a dip into the International pool with this collaboration and Kramium justified his invitation with the delivery of a perfect hook on the love-themed song. Not surprisingly, Phyno serves most of his rap lines in his native tongue while Kramium spices up the song with some Reggae flavor.

Phyno is widely known as the ambassador of rap music in the Igbo Language. Most of his raps are delievered in Igbo because, according to him, he respects his culture and loves being himself. However, he adds a bit of Nigerian Pidgin and English in his music. He believes that the elements of music makes it borderless which explains why he reached out to far-away Jamaica, to get the perfect partner for his new single.

The new video is such a beauty to behold, especially because of the beautiful scenes and moments captured in it, that would ultimately endear it to lovers of African and Jamaican music.