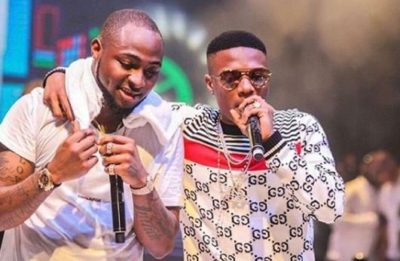 After the intense confrontation between Wizkid and Davido in 2017, their reconciliation, which happened at the tail end of the year, became one of the biggest moments of the music year. In a recent interview, Wizkid revealed that he initiated the reconciliation.

In a recent interview with Hip TV, Wizkid revealed that even though it came as a surprise to many, he actually reached out to his rumored rival, Davido, to be present at his concert. He said he sent a text message to Davido, inviting the ‘IF’ crooner to his concert – an invitation Davido honored to the delight of music lovers across the African continent, most of whom were pleasantly surprised to see Davido perform at the event alongside Wizkid

The Starboy Entertainment boss had spent most part of 2017 trading words with Davido on social media, causing their fans to fight dirty on social media platforms, about whom amongst the singers is better.

Since the reconciliation, the two singers seem to be maintaining a cordial relationship that sees them support each other on social media and even off it. It is rumored that the two pop stars are working together on a collaboration that is set to shake the continent.

I SENT DAVIDO A MESSAGE TO COME TO MY SHOW – #WIZKID REVEALS THE MOMENT #DAVIDO SURPRISINGLY JOINED HIM ON STAGE TO PERFORM AT #WIZKIDTHECONCERT IN DECEMBER, 2017 _ VIDEO CREDIT: HIPTV

The post What I Did To Reconcile With “Davido” – Wizkid || WATCH appeared first on TooXclusive.