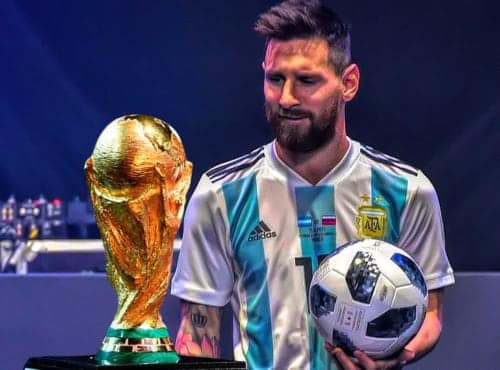 All eyes are set on the 14th June as the anticipate the highest sport event in the world looms. The FIFA 2018 World Cup hosted by Russia consist of 32 fantastic football countries from various continent.

Last World Cup champion, Germany remains the biggest contender for the plaque. The Deutsch land will be aiming to land their 5th world cup in Russia come 15th of July.

Although Germany maybe tipped for the glory, we can deny the other big hungry contenders like Brazil, Spain and Belgium.

Lionel Messi and his Argentine teammate will be looking forward to a memorable tournament which would most likely be his last considering the 30 year old and some his teammates retired from international duty after the 2014 world cup final.

Messi will have to be hero for the entire Argentine nation having failed to lift the trophy four year back. The Barcelona forward will captain his teammates to his 4th World Cup tournament.

Spain and Belgium are also parts of the teams to watch out in the competitions with the two team presenting a big name 23-man squads.

With so much talent deposition in the squad, is this the season Messi and Argentina will win World Cup?