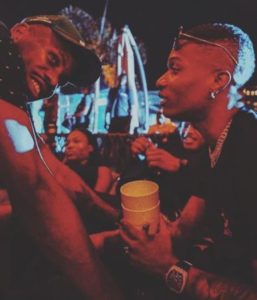 Wizkid has confirmed that he would be collaborating with YCEE on one of the constituent songs of the rapper’s debut album, according to a source believed to be close to Wizkid.

YCEE has been very vocal about his plans for a debut album. During his performance at the recently held GidiFest music concert, he announced to his audience that he has been in the studio working on his debut album. Following that announcement, he posted his picture with Wizkid on Instagram with the caption;

“Starboy, we gon need them vocals for the album ?? @wizkidayo ?: @daviidanthony“

Some hours after YCEE’s post, an account believed to be used by the Starboy to propagate his stories, responded to YCEE in a post captioned with ‘definitely.’

It is expected that the collaboration between the rapper and the singer would make it to YCEE’s debut album which is expected to be out later in the year.

The post Wizkid Confirms Collaboration With YCEE, Set To Feature On His Album appeared first on TooXclusive.