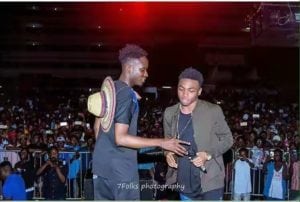 The patriotism of Mr. Eazi has been continually debated since his rise to prominence. The singer has ties with both Ghana and Nigeria; which caused some controversy for him with a lot of Nigerian music followers rejecting him for his unpopular opinions.

His colleague, Mayorkun is the latest critic to slam Mr. Eazi in a video that has since been viewed over a hundred thousand times on social media. In the video, Mr. Eazi was heard bragging about the wealth of the network he has in Nigeria, Ghana and the UK. But in response, Mayorkun referred to him as confused, although in a manner that seems to be a joke.