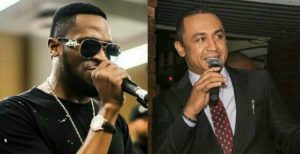 TX news had earlier reported that D’banj told controversial OAP, Daddy Freeze that he pays his tithe and he is proud of it. This happened at the birthday ceremony of actress, Omotola Jolade.

Daddy Freeze has now given a response to what Dbanj and Pastor Sam Adeyemi of DayStar Church, had said earlier at different instances, bothering on justifying tithing. In reacting to what Dbanj said, Daddy Freeze wrote;

“@iambangalee you appreciate my opinion, thank you and I extend you the same courtesy.
However, you can’t say you don’t care what the tithe is being used for, that’s wrong!
It’s why Nigeria, that produced the most PEOPLE LIVING IN EXTREME POVERTY on earth, according to www.worldpoverty.io also produced the WORLDS RICHEST PASTORS according to Forbes, it doesn’t add up!

Pastors are disobeying Christ by building schools with TITHE MONEY, yet poor church members can’t attend, in contrast to Teachings of Jesus who instructed us to love one our neighbors as ourselves, this he said is the THE GREATEST COMMANDMENT: MAT22-37-40 These same pastors in their uttermost hypocrisy are telling us to OBEY MALACHI WHILE THEY DISOBEY JESUS!

Tithe is not, was not and will NEVER be a part of Christianity.
Jesus never collected tithes, The disciples and apostles never collected tithes either.
Jesus NEVER collected first fruit offering either…. our first pastors the disciple and apostles didn’t collect it.
It’s a curse to obey ‘ tithe’ and ‘first fruit’ under the law and disobey the rest of the law of moses.
Moses brought the law, but Jesus Christ brought grace and truth.- John 1:17.
Tithing is not of grace. It is of the law.- Matthew 23:23.
? Galatians 3:10 ?
NIV
For all who rely on the works of the law are under a curse, as it is written: “Cursed is everyone who does not continue to do everything written in the Book of the Law.”
? Galatians 5 ?
[1] So Christ has truly set us free. Now make sure that you stay free, and don’t get tied up again in slavery to the law. [4] For if you are trying to make yourselves right with God by keeping the law, you have been cut off from Christ! You have fallen away from God’s grace.”