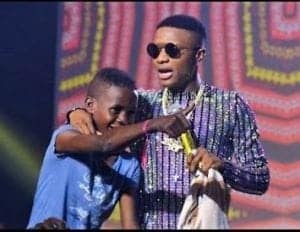 Star boy, Wizkid has been called out on social media by users who are concerned about the inactivity of Ahmed – the boy Wizkid publicly announced his signing to Star boy entertainment, late last year.

During Wizkid’s December 2017 Lagos concert, he brought a boy whose name was given as Ahmed, to the stage and made a promise to sign him to his label and give him N10 million. The moment Wizkid made the promise was captured in a video that went viral, and got a lot of fans excited about the new addition to the Star boy label.

However, about half a year after Wizkid made the promise, nothing has been heard from Ahmed and people are starting to raise eye brows. ‘Where is Ahmed?’, ‘Did Wizkid not sign him?’,  ‘Or did the Star boy tell a lie about signing Ahmed to score some PR points?’, ‘how about Basit – mechanic boy who Wizkid promised to sponsor through school?’, these are the question being raised on social media and Wizkid is at the center of it all.

Did Wizkid lie about signing Ahmed? Did he keep his promise to care for Basit? Please share your thoughts in the comment section.